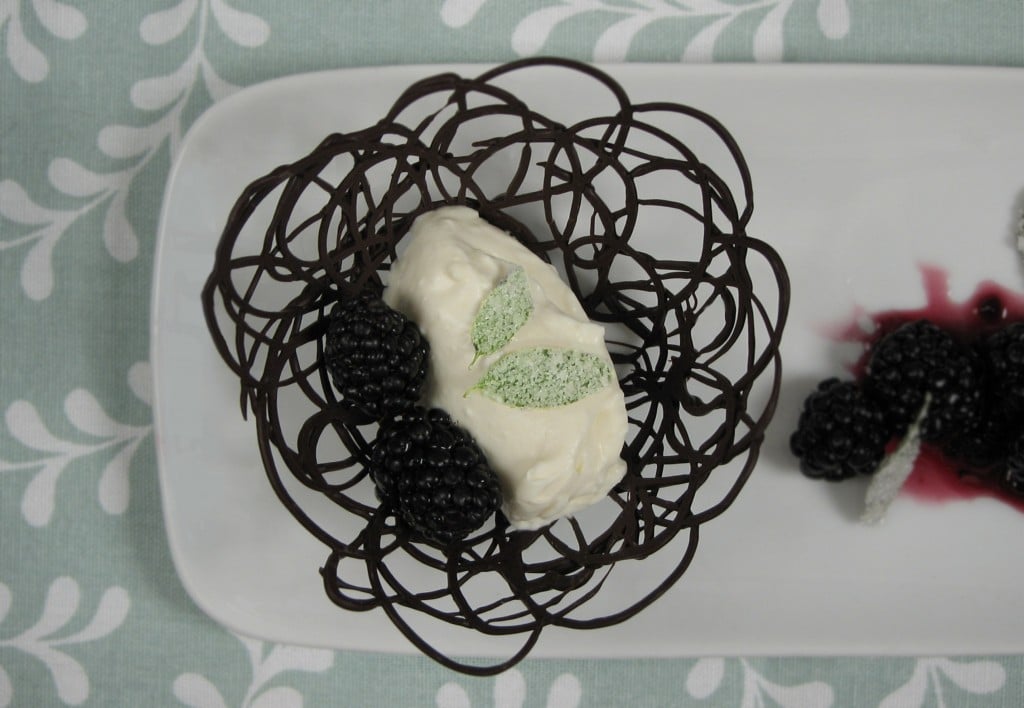 Because chocolate is such a precious ingredient, I always want to make the most of it. And sometimes that means making a dramatic presentation with a small quantity of chocolate.  I wanted to make a pretty, delicate chocolate container that was not too difficult (or time consuming) to make and did not require special equipment. A lacy pattern seemed like just the thing for individual desserts for a couple of reasons.  First, because the effect is so unusual in food (and impressive) and second, because you can make a container with very little chocolate. (My dessert cups are half an ounce each). This is desirable not just to be thrifty, but because a huge hunk of cold chocolate is usually not what you want stuck in the middle of your dessert plate.  But a delicate form you can shatter into shards offers a pleasant textural contrast to a dish– much like you get with a mint chip or stracciatella ice cream.

It took a few trials for me to hammer out a technique that works, but I finally found  a winner. First, I made a template for a parchment form, which gives you the shape of the bowl.  Then the lace pattern is made by piping loops of tempered chocolate out over the back of the form. Let the chocolate set and then peel away the parchment . Voila!  A stunning, (and simple!) bowl made entirely of chocolate.  I’ve even attached a pdf of my template so you can make your own bowl forms in a snap. The bowls work perfectly for serving ice creams,  mousses or chilled fruit.

at least 3 oz. high quality chocolate (makes four bowls).  White, milk or dark chocolate will all work equally well.
cutting board
bread knife
metal spatula (substitute butter knife if you don’t have one)
metal dough scraper (substitute metal spatula if you don’t have one)
small glass or ceramic bowl
a small, narrow-mouthed jar
parchment paper
template (you can get my pdf template here)
masking tape
pencil
plastic lids (optional) These are used to make an extra-flat bottom for the bowl to stand on. If you want to plate your dessert with the bowl tilted to one side this is unnecessary. The tops of plastic containers work well.

A cornet (pronounced core- nay) is a little parchment paper cone that pastry chefs use to carefully pipe out small, delicate lines. It takes a little practice to make and use cornets, but once you’ve got the hang of it, it’s absolutely the easiest way to work with small amounts of chocolate or frosting. 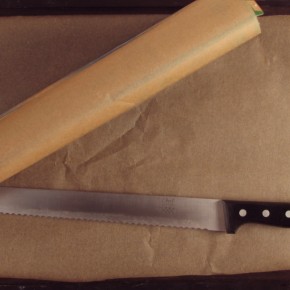 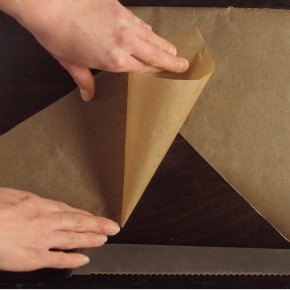 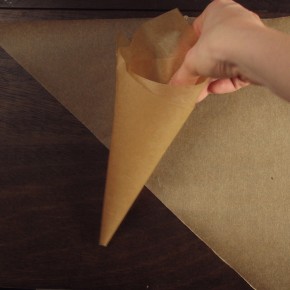 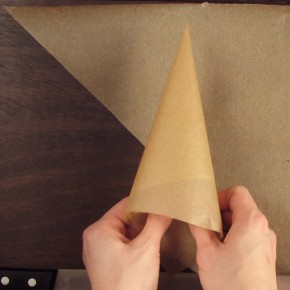 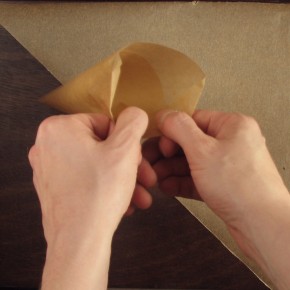 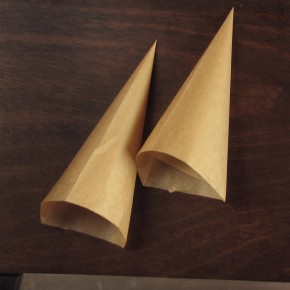 Cut paper:
Roll out and cut a section of parchment paper that is about square, or just slightly rectangular, with the width of the roll being the longer side. Cut the rectangle along the diagonal.
Roll into a cone:
Roll the triangle into a cone, with the tip of the cone at the center of the longest side. There are three corners that you want to align: the bottom, the middle corner and the top. Line up these three layers, and your cornet will have the right proportions.
Tighten:
Tighten the cone by pulling down on the outermost layer of paper while pushing up on the innermost layer with your thumb. The tip of the cone should close completely.
Lock:
Fold over the flaps of the cone to lock the cornet together. Make a few cornets at a time and have them ready to go before you start. For this project, you’ll want at least two. 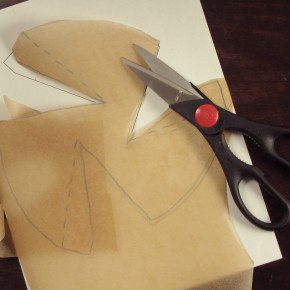 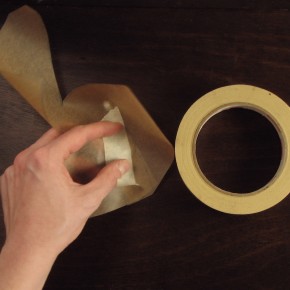 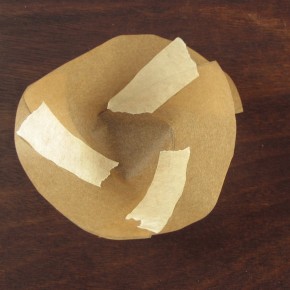 Trace:
The pattern from the template onto parchment paper.
Cut :
along the solid lines.
Fold & Tape:
Fold the parchment over so the edge of one flap lines up with the dotted line. Tape this seam in place (You should be taping on the inside of the bowl). Tape the other two seams together in the same manner and flip the bowl over.

One small batch of tempered chocolate can make up to 4 chocolate bowls, so if you want to make more than four, I recommend making four bowl forms, and then repeating with a second or third batch or chocolate (the parchment forms can be reused).

Temper about 3 ounces of chocolate following the instructions I give for small batch tempered chocolate. 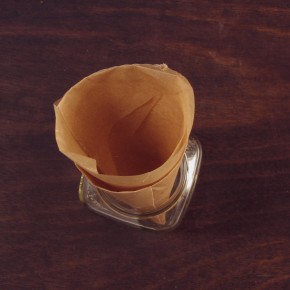 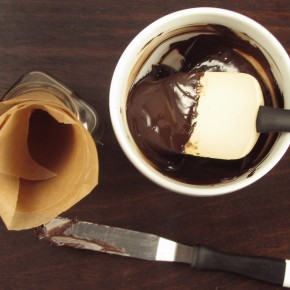 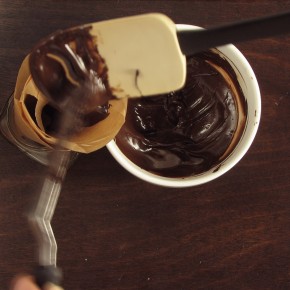 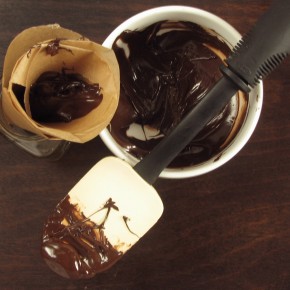 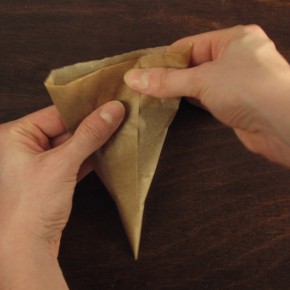 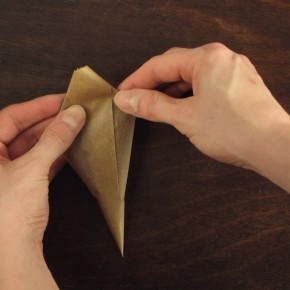 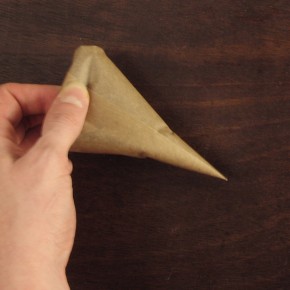 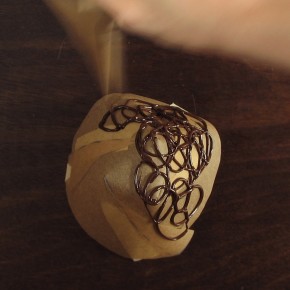 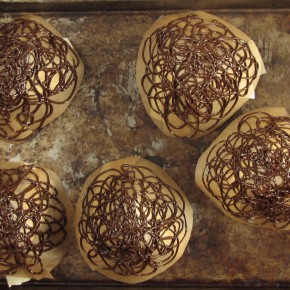 Fill cornet:
Place a cornet tip down into your jar. Use your spatulas to carefully scoop and scrape melted chocolate into your cornet– try to avoid getting any chocolate on the top 2 “ of the cornet. (I find if you pour straight from the bowl it is very easy to make a mess.) Fill the cone about one third to one half full of melted chocolate. Do not overfill- it might seem like it will save you time, but really you’ll just make a mess. Pick up the cone and hold it with the seam facing you. Gently squeeze the chocolate down toward the base of the cornet. Try to get all of the chocolate out of the top two inches of the cornet. Fold over the ends of the cornet away from you. Then begin rolling the end of the cornet away from you, like you would a toothpaste tube. When you are piping with the cornet, keep using this rolling motion to squeeze the chocolate out.

Pipe lace:
Snip the tip off of your cornet. Squeeze a little chocolate out to make sure that it is flowing well and in nice, even lines. If the lines are squiggly, cut a slightly larger hole from the end of your cornet. Squeeze out the chocolate in a loopy, overlapping pattern until you have covered the surface of the bowl form. Make sure that you use lots of overlapping lines– even though the pattern should be delicate if it is too delicate, the bowl will break very easily. Continue piping out all of the chocolate until you have covered all of your bowl forms. If you run out of chocolate before you are done, simply temper another batch of chocolate and pick up where you left off. It will not matter if the chocolate from one bowl was piped out from two different batches.

If you want to make flat bottoms to help the bowl sit upright, then after you have finished piping the lace gently place a piece of flat plastic on the top of your bowl form (what will be the bottom of the bowl). This gives the bowl a flatter, more stable surface to sit on.

Leave chocolate to set:
If the chocolate was properly tempered, it should start to set up in a few minutes, but it is very fragile at this state, so resist the temptation to touch it.  The first indication of chocolate setting  is that it will lose its wet-glossy sheen and taking on an even matte finish. It is best to leave the chocolate to cure at room temperature for at least an hour, but if you are in a rush once the chocolate has started to firm, you can pop it in the freezer for one minute. Don’t forget it in the freezer, though. Condensation as it warms up will damage the chocolate. 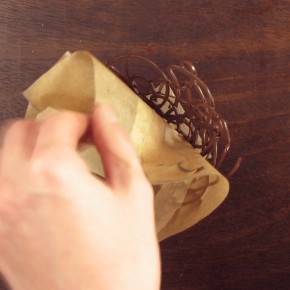 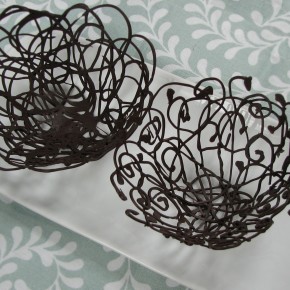 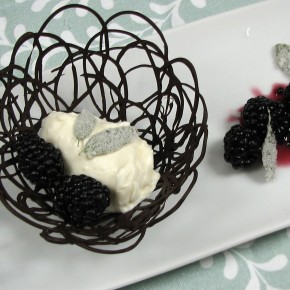 Remove bowl form:
Once chocolate has set, gently flip the bowl over. With a very delicate hand, peel the parchment away from the chocolate. Try to avoid touching the chocolate, and just touch the parchment. Once you have removed the parchment, the bowl is ready to use. You can plate a dessert with the bowl standing up, or tilted to one side.

Store:
You can store tempered chocolate for several weeks. Just make sure it is in a cool place and stored in a plastic container so it doesn’t get dusty. I set bowls in basket-shaped coffee filters to keep them from getting scuffed.

Serve:
Place chocolate bowl on a dessert plate and fill with the cold or tepid dessert of your choice. I designed the shape of this bowl so that it can be plated either propped to one side (like a nest) or sitting upright. Enjoy! 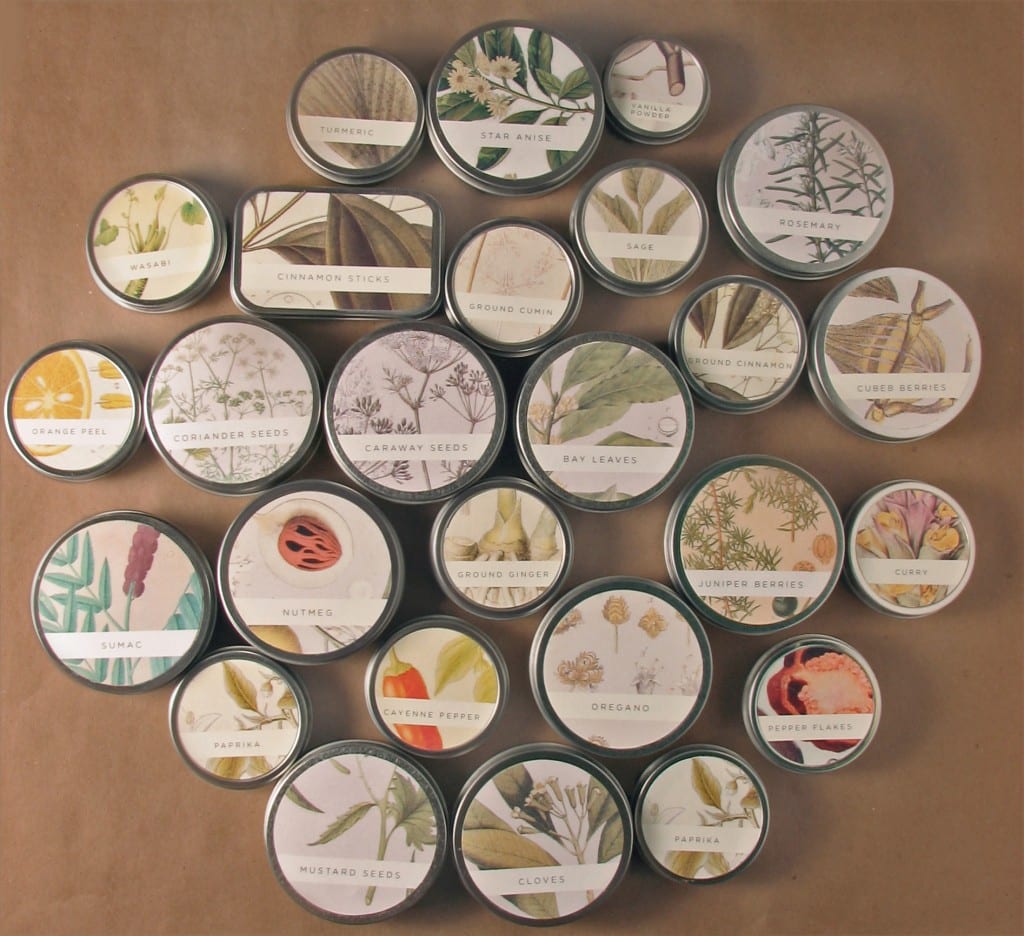 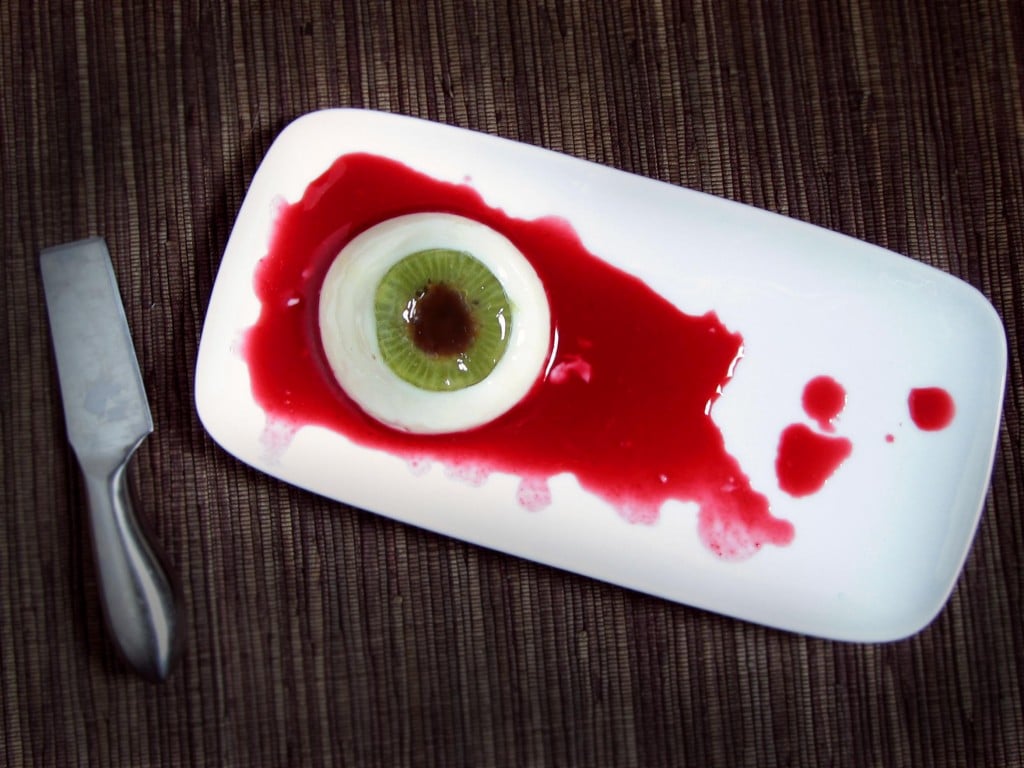 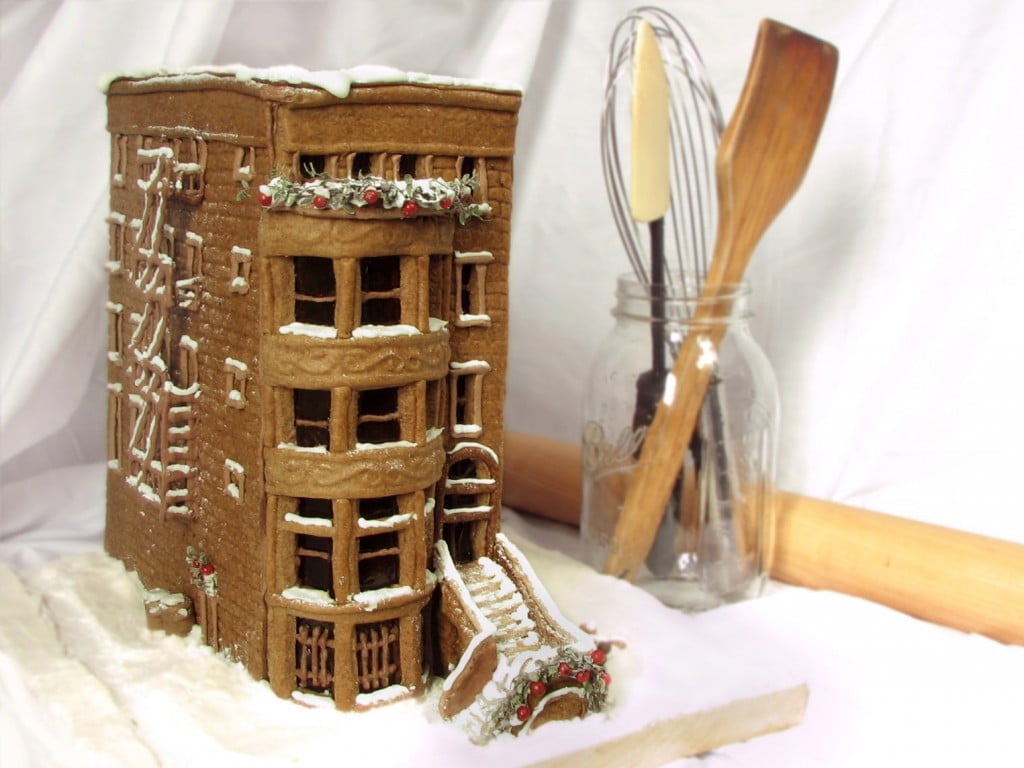 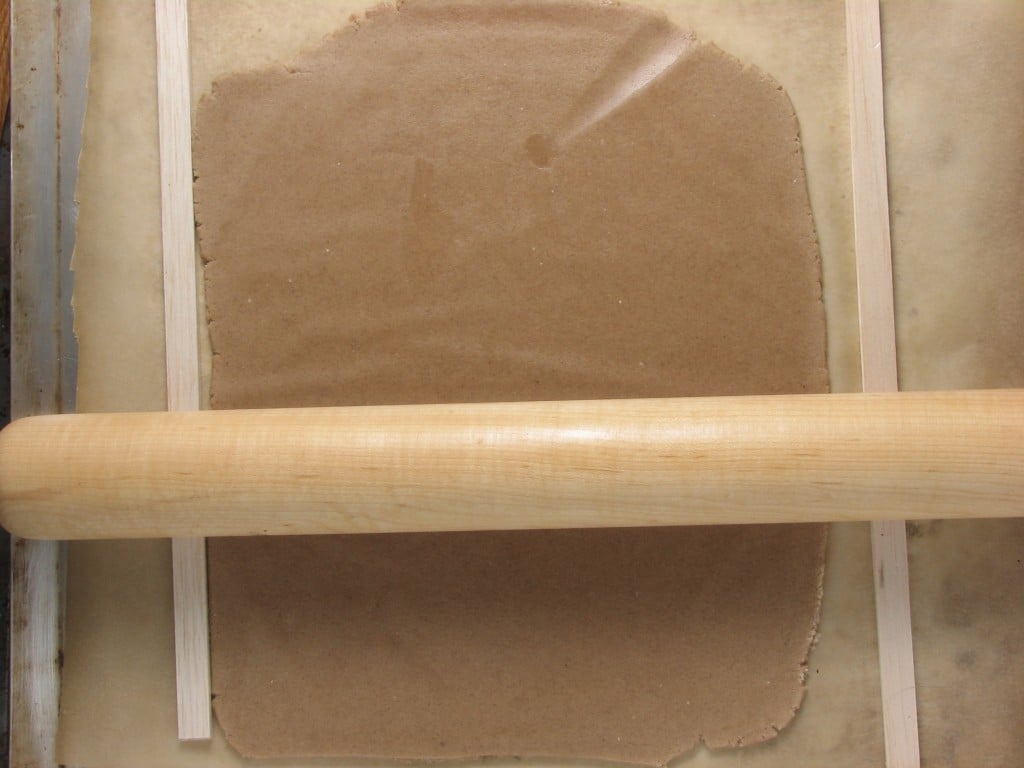 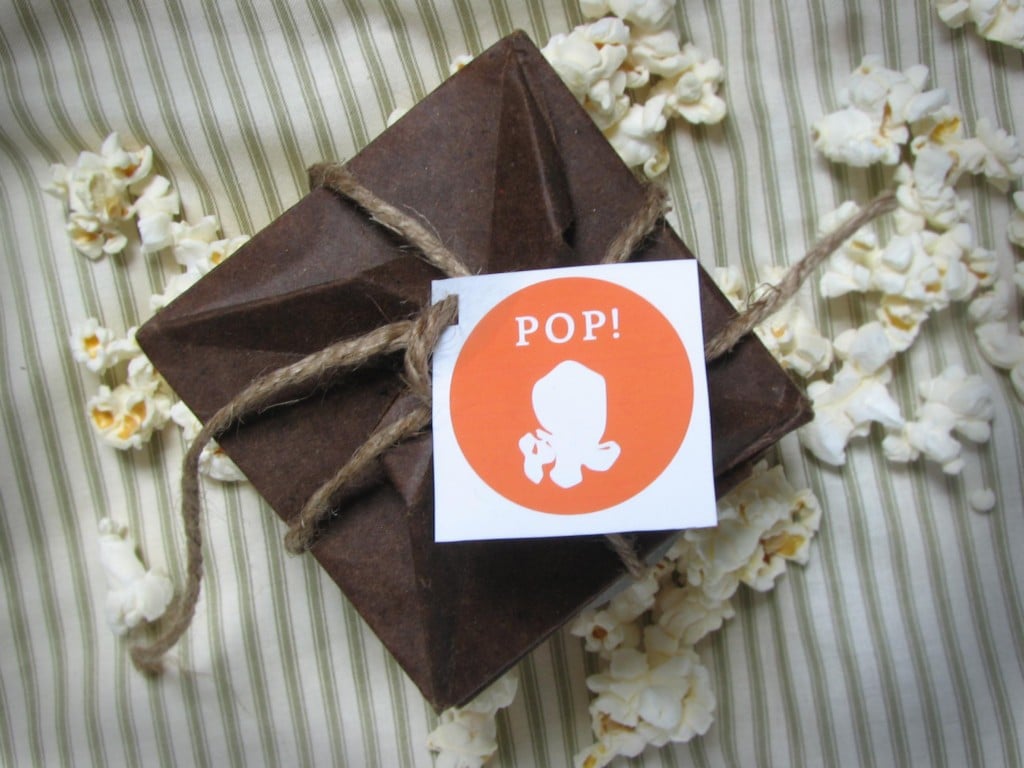 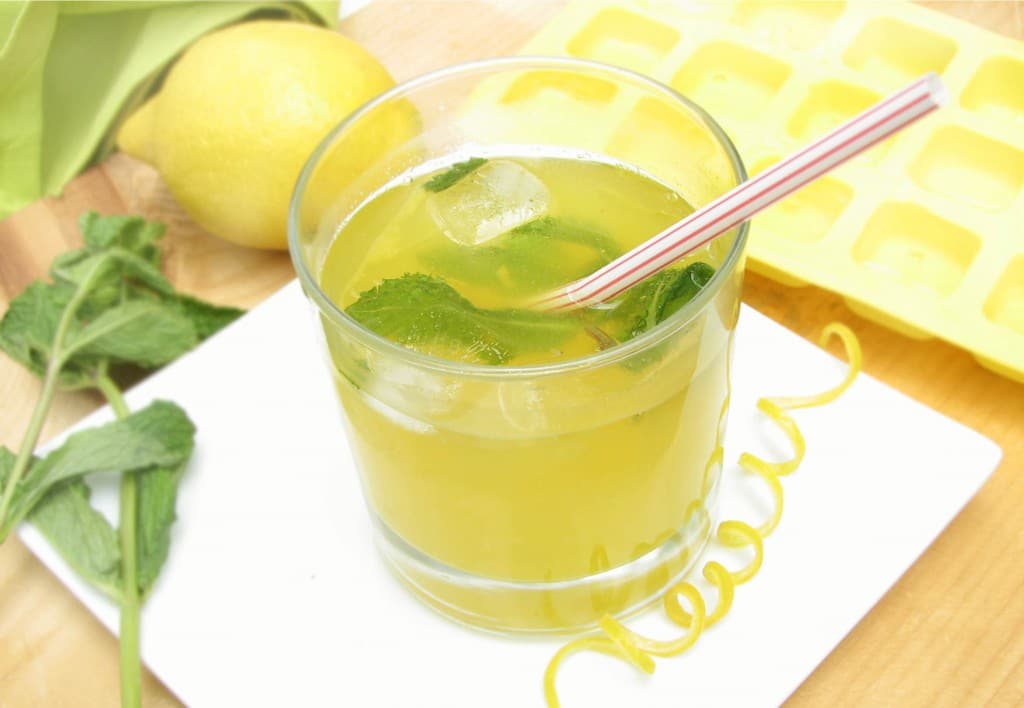